Skip to content
Forums
Main Category
Light and colors
What is an achromat...

What is an achromatic doublet?

Consider the following experiment: in a room, in which direct sunlight enters, we hold the prism with the refracting angle downwards. In the other hand we hold a white sheet of paper behind the prism. When the sheet is very close to it, we see only a regular bright rectangle without any colors. As we move the sheet away from the prism, then a violet-cyan band appears on the upper edge of the rectangle, while a yellow-red band on the bottom edge (image below). 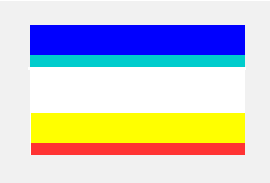 Let’s say that we’ve got this image with an equilateral prism (all angles are 60 degrees) when we hold the white paper at 30 cm distance from the prism. If we now "cut off" a part of this prism so that we get a prism with a refracting angle of let’s say 15 degrees (instead of “cutting” it, it is better to use another prism), then, by unchanged distance of the paper from the prism, we will get the same image, only the colored bands will be much narrower and the white space between them will be wider. The ratio between the width of the yellow and the red band (i.e. between the violet and the cyan one) remains the same. To get equal bands with both prisms, we have to move the paper behind the thinner prism farther away.

Let’s say now we have two prisms, both equilateral, but the first made from crown glass, the second from flint glass. If we hold the white sheets at equal distances from the prisms, then we notice that the colored bands are wider behind the prism of flint glass. But not only that: the colored image behind this prism is also more refracted, that is, the image is situated higher (image below).

Now, if we make the refracting angle of the flint prism smaller (instead of 60°, let’s say 40-50°), then we can find such an angle, by which the image in the figure (b) will be identical with that of the figure (a).

Please look now at the picture below (figure a): 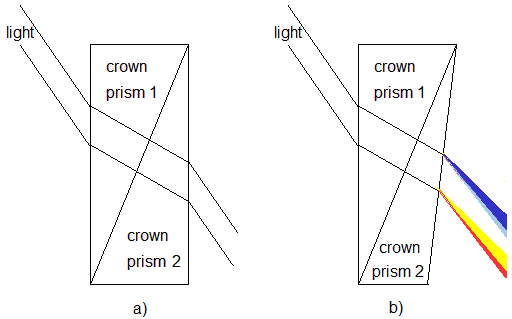 In the figure (a) there are two identical prisms from the same glass, forming a rectangle. The emergent beam is not refracted, only a little shifted, therefore no refraction colors appear.

In the figure (b) a part of the second prism is cut off, thus the incident surface is not parallel to the emergent one anymore. The beam is refracted a little upwards, thus the familiar yellow-red and violet-cyan colors begin to appear (maybe in the picture is not clearly visible, but the emergent beam is turned a bit upwards in comparison to the incident one).

Let’s say now that the second prism from the figure (b) is replaced by a prism with the same dimensions, but from flint glass (figure below). The flint glass, as said above, has a higher refractive index than the crown glass. 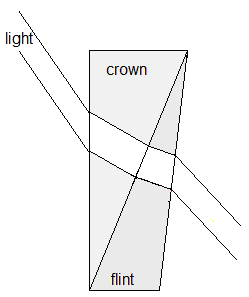 The light beam will first refract at the incident surface, then even more at the surface between the two prisms (this refraction is pretty small), and then for the third and last time at the emergent surface, but this time in the opposite direction with respect to the previous ones. The sum of all these refractions is that at the end the beam is refracted a little upwards. But look there: if an suitable refracting angle of the flint prism is chosen, then no colors will appear in the emergent beam.

So, what have we got? We’ve got a refracted beam, but without the yellow-red and the violet-cyan bands.

The flint glass usually has not only a higher refractive index, but it also causes a greater divergence. (footnote 1).

[footnote 1] I assume you know what divergence is. It is the cone-shaped propagation of a light beam. Every light diverges more or less, even the laser light. For example, if we direct a laser beam from the roof of a tall building onto the street at night, we will notice that the bright circle on the street is considerably larger than that on a nearby surface. [end of footnote]

It was said that the flint glass has a higher refractive index than the crown glass. To get the same magnitude of refraction with two prisms, the first made from crown glass, the second made from flint glass, we have to make the flint prism with a smaller refracting angle (note that I somewhere say “refractive index”, but somewhere “refracting angle”). Thus we will get the same refraction with both prisms, but despite of that, the width of the yellow-red and of the violet-cyan bands will not be the same at equal distances of the screens behind the prisms. With the flint prism we get wider bands. This happens because the flint glass causes a greater divergence of the beam.

When a beam of light is propagating frontally and thereby is diverging, then we can represent it as in the picture below:

When a beam of light is propagating sideways and thereby is diverging, then we can represent it as in the picture below:

A beam of light after a refraction becomes slanted (figure above). Therefore, one condition for the emergence of the refraction colors is already fulfilled. By the second refraction (as it happens for example on ordinary windows) the slantiness is counteracted, it is cancelled, so the light becomes upright again and continues its normal mode of propagation.

If the two surfaces of a window are not parallel, but slightly non-parallel, then the beam of light is refracted on the first surface and becomes slanted. The second surface counteracts this slantiness, but it cannot cancel it fully, thus the colors emerge.

If the two surfaces are not parallel, as it was the case with the two prisms of crown and flint glass (picture below), then, if a suitable angle of the second prism is chosen, the emergent beam will be refracted with respect to the incident beam, but nonetheless, the beam becomes again fully upright and no colors can appear. Thus we get a refraction without colors. This is called an achromatic doublet.

P.P.S. The principle presented in this answer is applied in the production of the achromatic lenses.
A convex lens can be regarded as a very large number of small prisms arranged in a circle with the refracting angles directed outwards (picture below).

A chromatic lens is a lens produced from only one type of glass and therefore it produces colors. In the diagram below is shown how the colors appear by means of a chromatic convex lens.

The same diagram applies also for an achromatic lens, only the yellow-red and violet-cyan rings are pretty narrower than with a chromatic lens.
The achromatic lenses also produce colors, because it is very hard to make them ideally achromatic.
The phenomenon above is a great evidence that the refraction of the light is not the only condition for the emergence of the refraction colors and that there is no such thing as “frequency of a color”.
By the way, the diagram below, which appears when the so-called “chromatic aberration” is discussed, has nothing to do with the truth.

It is also very indicative about the contemporary theory, that something which is so natural is called with such an ugly word - aberration.

See also:
Why is the sky blue? How does light make colors appear?

What are some impressive optical effects caught in a picture?

Can colors develop in a vacuum?

Please watch how the colors become visible in the refracted beam in this YouTube video (please watch it on "Full screen" after 0:42):