Skip to content
Forums
Main Category
Electromagnetism
What is an inverter...

What is an inverter in digital electronics?

If two plates of two different metals (say copper and zinc) are partly immersed in a dissolved agent (acid, base, salt), then the part of the copper plate outside the liquid is polarized in one sense (plus), the immersed part in the opposite sense (minus). For the zinc plate applies the opposite. Plus means blowing, minus means suctioning (please read Is positive and negative electricity nomenclature arbitrary). The two metal plates of the battery can be imagined as two fans. The one that blows outside the liquid (positive electrode = copper), that suctions inside the liquid; the one that suctions outside the liquid (negative electrode = zinc), that blows inside it. When the electrodes are connected with a metal wire, a closed flux is created. The plus is the strongest near the positive pole and, as we move away from it through the wire, its strength continuously decreases. The same applies to the minus, but starting from the other pole. Figuratively, we can represent it this way:

So, the current that emanates from the copper plate is plus current, because we usually speak of the current through the connecting wire. The current from the zinc plate is minus current. These plus and minus current are actually the “one” and the “zero” in digital electronics. They are fully equal forces in strength, only different in sign.

The biggest modern misconception on this field is that “one” means ON state (current flows), and “zero” means OFF state (no current flows). This misconception comes therefrom, that this mankind has never really understood the electric current.

An inverter is the simplest logic gate in digital electronics with only one input (IN) and one output (OUT). This gate inverts the signal at the input into its opposite at the output. This means that if at the input arrives PLUS, than at the output will appear MINUS and vice versa. The gate consists of two so-called complementary transistors (I will speak about complementary MOS-logic).

A transistor is a device that has almost infinitely great resistance if there is no signal to its middle part, which we will here figuratively call the “heart” of the transistor. The heart can be plus- or minus-sensitive. If a sufficient strong minus-signal arrives at the minus-sensitive heart (N), then this transistor’s resistance is practically zero, i.e. it is fully conductive. The reverse applies for the other transistor (NPN). 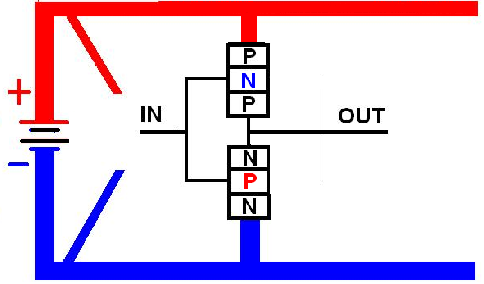 In both cases there is the same intensity of force at the “OUT”, only in the first case it is a blowing force, whereas in the second case it is a suctioning force.

Much more details about this you can find here www.newtheories.info.