An explanation of the terms current sourcing and current sinking.

The sourcing and sinking of the electric current is mostly mentioned in relation to electronics.
I will try to explain it with the help of an inverter in digital electronics. This is a quote from my article What are digital logic circuits?

If two plates of two different metals (say copper and zinc) are partly immersed in a dissolved agent (acid, base, salt), then the part of the copper plate outside the liquid is polarized in one sense (plus), the immersed part in the opposite sense (minus). For the zinc plate applies the opposite. Plus means blowing, minus means suctioning (please see Is positive and negative electricity nomenclature arbitrary?). The two metal plates of the battery can be imagined as two fans. The one that is blowing outside the liquid (positive electrode = copper), it is suctioning inside the liquid; the one that is suctioning outside the liquid (negative electrode = zinc), it is blowing inside it. When the electrodes are connected with a metal wire, a closed flux is created. The plus is the strongest near the positive pole and, as we move away from it through the wire, its strength continuously decreases. The same applies to the minus, but starting from the other pole. Figuratively, we can represent it this way:

So, the current that emanates from the copper plate is a plus current, because we usually speak of the current through the connecting wire. The current from the zinc plate is a minus current. These plus- and minus-current are actually the “one” and the “zero” in digital electronics. They are fully equal forces in strength, only different in sign.

Nowadays the electronic logic gates are made mostly of transistors. What is a transistor?

Unlike the majority of elements in electrical technology that have two ends, i.e. two leads, this element has three ends, because internally it consists of three segments (figure below).

About the transistor I will now figuratively say only what we need for this answer, but will explain more later in another answer. What matters most to us at the moment is its middle segment, which we will temporarily call the heart of the transistor. In the drawing we can see that the left transistor has a plus-heart (we call it plus-transistor), while the right one has a minus-heart (minus-transistor). We also see that the heart is a kind of bridge between the other two segments. In order to make the (+)transistor work, its heart should be actuated by (+)electricity. Thereby the bridge is established. If the heart is acted upon by (–)electricity, then it behaves indifferently. The reverse applies for the (–)transistor.

The transistor is actually a device that has almost infinitely great resistance if there is no signal to its middle part [footnote 2]. When there is enough strong suitable signal to the heart, then the transistor is fully conductive, that is, its resistance is practically zero. In this condition we can treat it as a small piece of copper wire.

There is another very important logic gate in the digital electronics which I haven’t mentioned above. It is called inverter. An inverter is the simplest logic gate with only one input (IN) and one output (OUT). This gate inverts the signal at the input into its opposite at the output. It means that if at the input comes plus, then at the output will appear minus and vice versa. This gate consists of two complementary transistors [in this answer I will speak about complementary MOS-logic (CMOS-logic) as the most implemented and at the same time the simplest logic family to understand]. 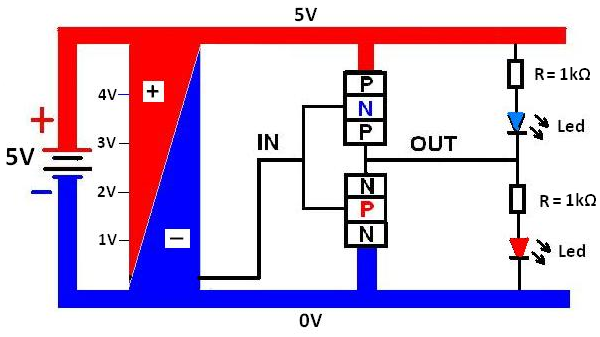 Many integrated circuits of the CMOS-family work with voltage of 5V, that’s why I use it in the examples. The halved red-blue rectangle is a high resistive wire (rheostat, potentiometer). The two complementary transistors are MOSFETs. The MOSFET has a very thin oxide layer between the metal contact and the semiconductor’s middle region (therefrom the name MOS, Metal_Oxide_Semiconductor), which acts as a capacitor. Due to this the transistor’s middle region is actuated by voltage, in contrast to the BJT, which doesn’t have this oxide layer (i.e. the metal contact is directly adhered to the semiconductor) and therefore it is actuated by a current. Therefore the MOSFET is called voltage controlled, while BJT current controlled transistor (more about the physics related to the transistor and to the capacitor you can find here  https://newtheories.info ).

So, from the Minus at the input we have gotten Plus at the output and vice versa. In both cases there is the same intensity of force at the “OUT”, only in the first case it is a blowing force, whereas in the second case it is a suctioning force.

The MOSFETs of the CMOS integrated circuits become fully conductive (enter in so-called saturation) at 1/3 of the supply voltage. The supply voltage in our example is 5V. One third of 5 is approximately 1.7. This means that the PNP-MOSFET becomes fully conductive by voltages between 0 - 1.7V. Please look at the circuit above. If we slide the “IN” wire along the high resistive wire from “bottom” upwards, then nothing will change up to the point 1.7V (that is, the PNP-MOSFET is for the whole time fully conductive and the red LED is lighting in full brightness), because the Minus up to that point is strong enough to maintain the full conductivity of the PNP-MOSFET.

5 minus 1.7 equals 3.3. This means that if we slide the “IN” wire along the high resistive wire from the “top” downwards, then nothing will change down to the point 3.3V (that is, the NPN-MOSFET is for the whole time fully conductive and the blue LED lights in full brightness), because the Plus down to that point is strong enough to maintain the full conductivity of the NPN-MOSFET.

These two intervals (0V-1.7V and 3.3V-5V) are called logic levels. The first is called LOW and the second is called HIGH. When the input signal has a value in these intervals, then one of the two MOSFETs is fully conductive, whereas the other is fully unconductive (its resistance is practically infinite). The values between these two intervals must not occur because in that case both transistors are somewhat conductive and the output will be undefined (both LEDs will light more or less dimly).

The reader should pay attention to the fact that when at the input comes a minus-signal with a strength of let’s say 1V, then it is strong enough to drive the PNP-MOSFET to saturation, but it has still a significantly smaller strength than the case when at the input arrives a minus signal of 0V. So, we get that 0V is stronger than 1V !!!

It may seem that both LEDs will light together regardless of what happens in the transistors. But it is not so. Let’s say that the lower transistor is fully conductive. Its resistance is zero. In that case the current will flow through the upper resistor, the blue LED and then through this transistor to the minus rail, because in the lower branch with the red LED there is a great resistor which prevents the current flow there. The current always finds the path of lowest resistance and here in our example the difference between 0Ω (i.e., the branch with the conductive transistor) and 1kΩ (i.e. the branch with the LED) is huge, thus only a negligible current will flow through the latter which is far from enough to make the red LED light up.

However, such an output as presented above with two lamps (i.e. two loads), both in upper and lower branch, does not exist in practice. The example was only for a certain clarification. In practice there is a load only in the lower branch. It will be ‘set in motion’ only when the output has a plus-signal. This concept is because the operational role has the “one” - the plus-electricity. When the plus-electricity is chosen to have the active role, then it is called positive logic. There are also electronic circuits where the “zero” has the active role (negative logic), but it is still a rarity. So, since at the end of the circuit one kind of electricity should be given priority, here it makes some sense to talk about that the “one” is a closed circuit and the “zero” is an open circuit. For example, if all the necessary conditions for an elevator to start off, which are reflected in logic circuits, are fulfilled [the door sensor gives a signal that it is well closed (=1), the button for the desired floor is pressed (=1), the overload sensor gives a signal that the elevator is not overloaded (=1) (in case of non-overload it gives actually 0, but with an inverter it is converted to 1)], then the output will have a plus-signal (since all the signals are joined by an "AND" function, which, as we will see soon, gives plus at the output only if all the inputs are plus) and between it and the minus-rail there will be a relay (switch) which will turn on the electric motor of the elevator. Otherwise, there will be a minus at the output, so that this minus with the one from the negative rail (it is actually the same minus) cannot turn on anything, that is, no circuit is closed.

Let’s say we have an integrated circuit and between the pin 5V and another pin (the one in the middle in the figure a below) is connected a LED lamp. The middle pin is held “HIGH”. Therefore, both pins are “HIGH”, thus the lamp is off. When at the middle pin arrives a minus-signal (=LOW), the lamp lights up. This is a current sourcing configuration because the positive terminal of the LED lamp is connected to the Plus battery pole and then the lamp is awaiting the other pin to become “LOW”, so that it can light up. 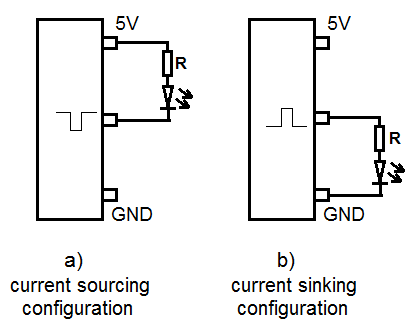 The configuration in the figure b is “current sinking” because the negative terminal of the LED-lamp is connected to the Minus battery pole (so-called Ground, GND). The middle pin is held “LOW”. Therefore, both pins are “LOW”, thus the lamp is off. When at the middle pin arrives a plus-signal (=HIGH), the lamp lights up.

See also:
What is Ground in electricity?