What is magnetic hysteresis?

The greater the velocity of the body is, the stronger is the plus in front of it as well as the minus behind it.
When a propeller is turning underwater, then it creates a swirling water motion, but at the same time it creates a spiral cavitation motion (video below).

The water motion is Plus, while the cavitation motion is Minus.
The electric current is also a swirling motion through the conductive path. This motion also creates a negative spiral motion through it. It is the magnetic current.

When a direct current is flowing through a metal wire, then both currents are flowing from the Plus to the Minus-terminal of the battery: the electric current counter-clockwise, the magnetic current clockwise. They are at angle of 90 degress. It is the same with the water-current and the cavitation-current (figure below). 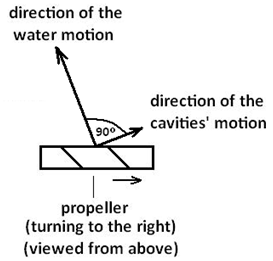 When we make a loop from the wire, then the spiral magnetic current forms a straight magnetic field. The field is straight, but twisted because of the spirality of the magnetic current. The situation in the loop is similar to this figure:

What is magnetic permeability?
I will answer this question through a comparison because it is the best doing so.
Please look at this image:

This is a solenoid with an iron rod in it connected to a battery. We will compare the iron rod to a rubber rod.
Imagine you have two equal rubber rods, but made of different types of rubber. The different types of rubber have different elasticity. Now imagine that you have to twist both rods to an equal extent. You will do that easier with the rod from the more elastic rubber. It offers a lower resistance, but also less energy will be stored in this rubber. What energy? If you leave hold of the rod, it will untwist by itself releasing the stored twisting.
We can say that the more elastic rubber has a higher elasticity. But we can also say that it has a lower resistivity. The resistivity is the opposite of elasticity, R=1/E. [ We can always speak of the opposite (reciprocal) of a certain quantity. For example, the opposite of speed is slowness (1/v). The cheetah is the world champion in speed, but the snail is the world champion in slowness. Its slowness is 115 s/m. ]

When we connect the solenoid with the core to a battery, then the current doesn’t establish itself in the circuit momentarily, but it needs some time. Not much time, but somewhat more in comparison to the case when there is not a core in the solenoid. Why? The establishing of the electric current in the wire is closely connected with the establishing of the magnetic current in it. If one of them experiences resistance, then it passes over to the other. The magnetic forces in the wire experience resistance during the process of twisting of the magnetic forces in the core. When they are twisted to the extent, which the magnitude of the magnetic current can twist them, then the state becomes stable (as if there is no core in the solenoid).

The whole process of establishing the current in the circuit can be compared (in a sense) to a DC circuit which has a solenoid without a core and a series resistor whose resistance after closing the switch quickly drops to zero.

Look please now at the circuits below:

After closing the switch in the figure (a), the magnetic forces in the core of the solenoid get twisted (the resistor R is added solely to limit the current and thus to save the battery from a quick draining). When we try to move the switch to the position (2), the circuit becomes broken for a moment. There is nothing to hold the magnetic forces in the core twisted anymore, thus they begin abruptly to untwist. It induces a strong current in the wire of the solenoid which is manifested as a great voltage at its ends. This is called “self-induction” and the voltage is called “back EMF”. Since the back EMF can be many times greater than the voltage of the battery, the approaching of the switch to the position (2) produces a spark. This phenomenon is used, among other uses, in the ignition systems of the automobiles to ignite the fuel.

We have already said that the magnitude of B can be expressed by B=μH. However, this is only an approximation because the function is not linear, but exponential (figure below). 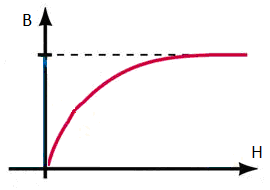 Let’s compare it to the rubber rod. When we twist the rubber rod, then we soon arrive at a point when the further increasing of the applied force doesn’t result in further twisting of the rod.
The formula B=μH is actually an approximation of the exponential curve in the interval before it reaches the maximum. In that interval the curve is nearly linear.
Now, please look at the so-called hysteresis loop: 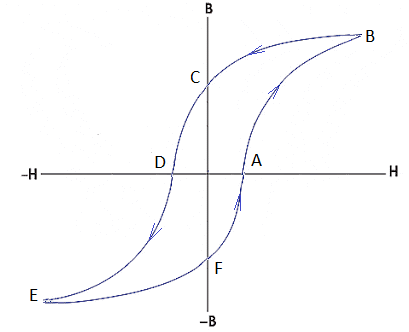 From the point A to the point B we have the same exponential curve from the last graph, only it is shifted a little to the right. The electric current in the solenoid is slowly increasing and in the point B the magnetic field B reaches the maximum. Let’s say now that the current in the solenoid begins slowly to decrease. The field H also decreases and in the point C it drops to zero. But look, although it is zero, the field B is not zero. The core retains some magnetism. Using the rubber rod analogy, we can say that the twisted rubber rod, after releasing it from our hands, does not untwist fully. It is not so elastic to untwist fully, but it retains a certain amount of twist. 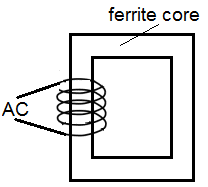 When the solenoid is connected to a source of alternating current, then there is such a current in the core, too. Please watch this video, which is part of my article Electricity flows in an open circuit, too!

In relation to this article, please see also:

What is an electric current?

The principle of electromagnetic induction can be found in mechanics and in an optical illusion!