Skip to content
Forums
Main Category
Electromagnetism
What is the working...

What is the working principle of an induction motor?

To better understand this answer, I strongly recommend that you first read this answer Mitko Gorgiev's answer to Is the explanation of the working principle of synchronous generators and motors true? If yes, then why?

The magnet between the coils of the synchronous motor from the answer above can be replaced by a cylindrical can of a diamagnetic or paramagnetic material (say copper or aluminum), placed on the same axis in the center. Thus we get a turning circle instead of a turning stick when viewed from above. We have now an asynchronous motor, that is, an induction motor.

Let us first make an experiment. In a flat piece of styrofoam we thrust a copper or aluminum plate so that it can stand vertically. We place the styrofoam in a bowl of water and slowly near a strong neodymium magnet close to the copper plate. The “yawl” starts slowly drifting away from the magnet. If we then slowly move the magnet away from the plate, it starts to follow the magnet. When the magnet rests, the plate rests beside it, too.

The slope (i.e. the derivative) of the sine function sin(x) is cos(x), hence the force by which a coil acts on the can depends on the product "sin(x)•cos(x)". In the figure below are shown three by 120° shifted sine curves, representing the strength of the three-phase alternating current, and below them the products of them and their slopes:
sin(x)۰cos(x) ;
sin(x+2π/3)۰cos(x+2π/3) ;
sin(x+4π/3)۰cos(x+4π/3).

From the figure we see that these products are also by 120 degrees shifted sine curves, but with double the frequency (due to the two periods of repulsion and the two periods of attraction). Positive half cycles of such a sine curve are the periods when a coil repels, and the negative half cycles are the periods when the coil attracts the can. But apart from that, that one coil repels or attracts the part of the can in front of it, it also repels or attracts the parts of the can in front of the other two coils.

Such a motor is not effective because of the large distance of 120° on which a coil should act to attract or repel the magnetic pole in front of another coil. It can be improved by doubling the number of coils, i.e. by adding to each coil, so to speak, a double exactly opposite it, so that now we have coils at every 60°. We can imagine each pair as just one coil, which we have stretched exactly in the middle and got a straight line. If at a given moment on the left side of the unstretched coil the magnetic pole is plus and on the right side certainly minus, then the order of the poles after stretching will be as in the figure below.

For one thing to be turned around acting with forces on two opposite sides, it is necessary that both forces have contrary directions (figure above). In the interspace of the stretched coil we now have opposite magnetic poles, thus the forces that act on the can are exactly in such directions.

If we carefully consider the motor image above (it refers to the same moment π/4), then we will notice two things: firstly, the homonymous magnetic poles, both in the rotor and in the stator, are grouped; secondly, the rotor groupings with respect to those in the stator are displaced by 120°. That's why the rotor is turning aiming to lock its magnetic poles with the opposite of the stator, which are at reach of 60°, but these are continually escaping, and the rotor is continually chasing them.

These motors are called asynchronous because they always, even when they are not loaded, turn slower than the magnetic field of the coils. The difference may be smaller or greater and is called slip. It is expressed in percentages. For example, if a motor turns with 10% slip, it means that it makes 2700rpm, because 10% of the 3000rpm is 300.

The slip depends on many things in the motor design, and additionally on the load. This motor is turning slower upon increase of the mechanical load. The principle example of an asynchronous motor just presented is still inefficient and with great slip. It could be improved to a certain degree if a can with a thicker wall is used, because the six induced looped currents in the can will be stronger, hence the repulsion and attraction, too. Also, the distance between the can and the stator (so-called air gap) should be as small as possible.

The three-phase asynchronous motors, unlike the synchronous ones, are self-starting. Therefore they are commonly used in various industrial machines, elevators, pumps, etc. When the mechanical load on these motors increases, then the current drawn from the network also increases.

Instead of North and South, I have called the magnetic poles Plus and Minus. Plus is the magnetic pole of the compass which points North. In relation to this, please see Is positive and negative electricity nomenclature arbitrary 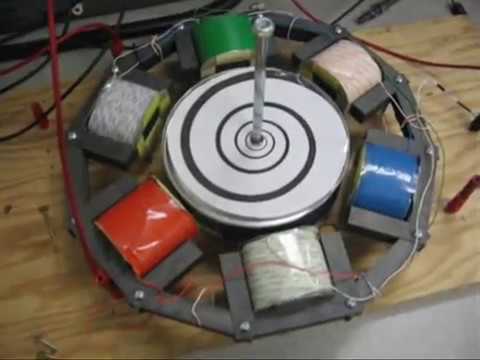