Skip to content
Forums
Main Category
Electromagnetism
What is the Faraday...

What is the Faraday paradox?

Faraday’s law of induction is actually not true.
In the following articles I explain it in details:

1. Faraday's law of induction is not true

As a consequence of its untruthfulness, there is an experiment in the field of electromagnetism called "Faraday’s paradox". However, it is not a paradox at all if one truly understands the electric current and the electromagnetic induction.
In relation to this please read:

What is electromagnetic induction? and
What is an electrical current?

What is the Faraday’s paradox? It is an experiment which contradicts the Faraday’s law of induction. I will not repeat here what it is about, but will only link the Wikipedia article and a YouTube video on this subject.

(I have borrowed this image from Faraday Rotor Experiment and have slightly modified it.)

What is “paradoxical” in this experiment? In all the three variations of it, no matter what is rotating, there is no change in the magnetic flux through the copper disk (as it is required from the Faraday’s law) and yet there is an induced current in two of the three variations.

In the article No.2 cited above I show that a current is induced in a wire when it is moving not perpendicularly to the magnetic lines of force (as it follows from the Faraday’s law), but in line with them.

The magnetic field at the edges of a magnet begins to curve (figure below).

Due to this curvature, when a copper disk is rotating in front of a magnet, then there is always a small component of its outer parts’ velocity which is in line with the magnetic lines of force. This component induces a small current in the outer parts.

Instead of a copper disk, let’s imagine that a spoked wheel is rotating (figure below). 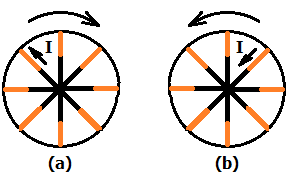 Let’s also imagine that the magnet is behind the wheel with its plus-pole towards the wheel (I call plus the pole of the compass needle which points North; please see Is positive and negative electricity nomenclature arbitrary?). The wheel in figure (a) is turning clockwise. The outer parts of the spokes (orange colored) cut the magnetic lines of force, however, not at 90 degrees, but somewhat lesser. It is so because of the curvature of the magnetic field near the edge of the magnet. Therefore a weak current is induced in the outer parts of the spokes which flows towards the rim.

Please look now at the figure below: 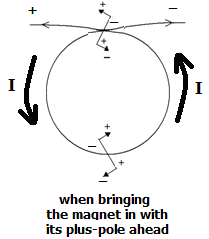 When the spoked wheel is turning clockwise [figure (a)], then the marked spoke (where the arrow and the letter “I” are) is moving, in a sense, towards the left edge of the magnet. From the viewpoint of the magnet, it is its right edge. Whether the spoke is moving towards the magnet or the opposite is happening, there is no difference. Therefore, we can compare this situation to the one in the figure above, but referring to the current’s arrow on the right side of the wire loop. Since this arrow points upwards, the direction of the induced current in the spoke will be also upwards, that is, towards the rim of the wheel.

When the spoked wheel is turning counter-clockwise [figure (b)], then the marked spoke (where the arrow and the letter “I” are) is moving, in a sense, towards the right edge of the magnet. From the viewpoint of the magnet, it is its left edge. Therefore, we can compare this situation to the one in the figure above, but referring to the current’s arrow on the left side of the wire loop. Since this arrow points downwards, the direction of the induced current in the spoke will be also downwards, that is, towards the center of the wheel.

In the linked YouTube video the author says (at 0:56) with a text on the screen: “obeys left hand rule: B field is up, velocity is clockwise, so electricity flows to rim”. The Fleming’s left hand rule is not used for determining the direction of the induced current, but it is the Fleming’s right hand rule. I have asked the author in a comment under the video, how he has applied the “left” hand rule to determine the direction, but he hasn’t answered yet.

When both the magnet and the copper disk are rotating, then there is no difference compared to the case when only the disk is rotating. When a magnet is rotating, then its field is rotating together with it, but it cannot have any influence on this phenomenon.

When the magnet is rotating alone, then no current is induced. This is easily understandable because of the following: the magnetic field in and around a magnet is twisted (please read Inducing electric current in a wire by moving magnetic field or Are electromagnetic waves transverse or longitudinal?). When we generate electric current in a wire loop by moving a magnet in or out of it, then we have a device very similar to the mechanical “push and spin” devices, which can be found in some kids toys (carousels), some ashtrays, then in the push-pull screwdriver drills etc.

But we cannot make the carousel or the ashtray spin only by turning the twisted axle. We have to push the axle.