Electricity flows in an open circuit, too

24/09/2020 1:58 pm
A considerable amount of current can flow in an open circuit under certain conditions. I will present you a very simple experiment which undoubtedly proves that. But before that, let me give you a little introduction.

Let’s first consider something else.

In this example a body is moving linearly through the air. Can we achieve higher and lower pressure on opposite sides of a body whose place in the space remains stationary? Yes, we can do that by means of a fan. When a fan is turning, then it is blowing in front of it (higher pressure/plus), but it is suctioning behind it (lower pressure/minus).

Let’s say we have a fan without internal drive. If this fan is standing on the way of the wind, then it is turning. We can simulate this by taking a small fan (like those in computers) and a hair dryer. We bring the turned-on hair dryer close to the fan. It starts to turn in one direction. If we bring a turned-on vacuum cleaner close to it, then it starts to turn in the contrary direction. But if we attach the fan to a wall and then bring the hair dryer or the vacuum cleaner close to it, the fan is not turning. The reason is that behind the fan there is no space filled with air where the flux can spread or from where it can suction.

Exactly the same happens with the electric flux. For example, when we touch with a finger the end of the phase tester (one-contact neon test light) (the other end touches the phase), our body becomes, so to say, the "space filled with air", actually an object with sufficient electrical conductivity whereto the flux can spread, or wherefrom it can suction and consequently the lamp lights up. [ The phase tester is a series connection of a resistor and a small neon lamp. ]

If the fan in the already described experiment is a little away from the wall, then it is turning slowly. The farther it is away from the wall, the faster it is turning, until it reaches the maximum speed. The farther removal has no influence on the turning speed. Let’s compare this to the phase tester (PT). If we attach a small piece of metal wire on the back end of the PT, then the lamp lights up weakly (we hold the PT on its plastic part, hence our body in this case has no influence on the phenomena). The longer or the thicker the wire is (or both at the same time), the stronger the lamp is shining, until it reaches the maximum. The further increasing of the wire volume has no influence on the lamp’s brightness.

However, it is not solely the volume of the wire that matters, but also its conductivity. If we have two equal wires, but made of different metals, the lamp will shine brighter with the wire of better conductivity.

The conductive body behind the PT doesn’t have to be made of metal. It can be also an electrolyte. As we already know, the pure water is a bad electrical conductor. But as soon as we add acid, base or salt in the water, its electrical conductivity considerably improves. Therefore, we can increase the volume of the conductive body behind the PT by immersing the wire in a container of salty, alkaline or acidic water. The earth/ground is actually a huge container of such water. The minerals in the Earth make the water an electrolyte and thus a large and good conductive body. But it is so only when it is sufficiently moist. In summers with low rainfall, the earth is dry and it is a bad conductive body. For example, if we build a city in the Gobi desert (Gobi is the driest place on the planet Earth), we cannot use the earth as “ground”. We have to invent another ground. We can, for example, let a jumbo-jet make circles over the city and use its huge chassis as “ground”. We will connect all the grounding wires to it and thus get sky-earthing. Of course I am joking, but principally there is nothing wrong in this joke. I have made up this example and oxymoron to stress how little we understand the electricity. I have seen the term “ground return” many times, as if the electric circuit closes itself through the Earth. No, in most practical cases it is not true. The electric current actually ends blind in the earth. Instead of ending in the earth, it can also end in the sky, i.e., in the jumbo-jet.

Let me now present the experiment which shows that the electricity flows in an open DC circuit. All we need is a battery, a small LED lamp and two large conductive objects on both ends of the LINE. Below is the schematic of the experiment:

I have recorded also a video to show the experiment (I apologize for my bad English):

The larger the metal objects, the better the result, i.e., the LED-lamp is shining brighter. But this can be somewhat misleading, because it is not the size of the object that matters, but the volume of the conductive material and its conductivity. In this video I have used a hollow metal object – a washing machine. The result would have been much better if I have had a metal object of the same size, yet not hollow, but solid.
If you don’t have two large metal volumes available, then as one large metal volume you can use the protective earthing conductor from a socket.

We can imagine the battery as many fans/propellers in series (please see What is a battery?). If these propellers are placed in a vacuum, then nothing will happen because there is nothing in the space around them to be moved. As soon as we put air or water in the space, the motion begins. It is the same with the battery and electricity. When we connect enough conductive volume behind the battery’s fans and in front of them, then the negative terminal has ‘Wherefrom’ it can suction and the positive terminal has ‘Whereto’ it can blow that, what the other terminal has suctioned. The electricity flow, just as the water- and air flow, is a continuum and as such it needs continuity along both sides of the “propeller”. You will never really understand the electric current if you think of it as of separate moving particles. Think of this: when one talks about water-flow, he doesn’t talk about moving particles. When one talks about air-flow, then he doesn’t talk about moving particles. Why so? Because both are fluids. And a fluid is like gelatin. It sticks together and moves together as a continuum. Then, why would we think of electricity flow as of separate moving particles?

In case we close the conductive path in a circle, then the blowing from the one side meets with the suctioning from the opposite side, thus intensifying the electric flux many, many times.

Regarding the open-circuit flow, think also of the following examples from the history: many of you certainly know that we can make a simple radio receiver without using any external power source. It is called a crystal radio. The electromagnetic waves from the transmitter hit the antenna and induce electric current in it which then goes in the receiver’s apparatus. But this current would be very weak to actuate the headphones of the apparatus if behind it there is not sufficient conductive volume. What is used as a conductive volume in this case? The Earth, of course. The apparatus has to be well-earthed if one wants a satisfactory result, i.e., to listen to the broadcast of certain radio stations on the headphones.

Consider also this: In the 19th century was in use a single-wire telegraph (so-called “Earth-return telegraph”) after the people realized that the second wire is superfluous and thus they can cut the costs on wires. It was a simple DC on-off Morse code system with a battery earthed on both the transmitter’s and the receiver’s side. It was actually an open-circuit system.

Another thing. If we swing a glass- or a vinyl-plate like a hand-held fan, then we cause an alternating air-current, that is, we cause longitudinal waves in the air. If we swing it pretty fast, then we cause sound waves at the same time (which are also longitudinal waves). If we now rub the glass or the vinyl plate with a woolen cloth, then the plate is electrified and if swing it again, we cause besides the air- and the sound-waves also electromagnetic waves (in relation to this please see Are electromagnetic waves transverse or longitudinal?).

If we move the glass towards one end of a piece of metal wire, then this immaterial wind propagates through the wire to its other end (if the wire is good conductive, it could be many kilometers long). At the other end blowing takes place (+). If we move the glass away from the wire, then at the other end suctioning takes place (–). With the minus electrified object (that is, the vinyl), the opposite happens.

Here is the evidence. Please look at the circuits below: 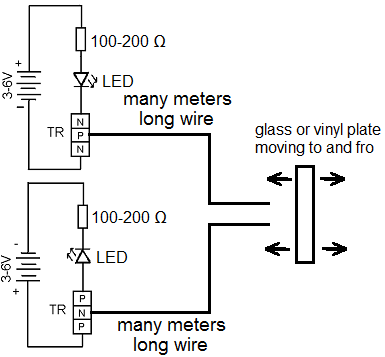 For better results we should double the number of transistors (figure below). In this case the amplification is greater and the experiment is much more easily performed (we make actually the so-called Darlington pair of transistors).

More details about this experiment and about its analog performed with electroscope, you can read in this article What is electromagnetic induction?

This experiment shows again that the electricity flows in an open circuit. Actually, when we move an electrified object towards or away from a piece of wire, there is already an electric current in it. We need the transistor’s circuits only to ascertain that that current exists.

Now comes the sweetest part. In my book “New theories on electromagnetism and on light an colors” there is one more experiment with these circuits, a very astonishing one (it is on page 27 and 57). There I have actuated the transistors through electrified glass and vinyl, but acting on the emitter or on the collector, not on the transistor’s base (the free end wire is connected either to the emitter or to the collector). However, this wouldn’t have been possible if a piece of wire, 10–15 cm or more, was not attached to the base. It is an original experiment which you cannot explain for sure from the standpoint of the contemporary theory of semiconductors.

In relation to this answer, please read also my answers to the question:

What is Ground in electricity?

What is an electrical current?

P.S. My niece recently got shocked while she was sewing on an electrical machine. The voltage of the socket (220–240V) was somehow present in the metal plate below the needle. She actually got shocked because she was touching the metal plate with her hand and at the same time she has touched with bare foot a computer chassis under the table which was plugged in and thus grounded.

I have held many times a bare phase wire with a bare hand, but standing on an insulated floor and not touching anything with the other hand. The current which is flowing in my body in this case is too weak to be felt, because my body is the last link in the conductive chain. But if I touch with the other hand a large metal object, even if it is insulated from the ground, then a strong shock is inevitable. In this case my body is not anymore the last link in the chain and therefore the electric flux through it is stronger. If this shock lasts two-three seconds, it can be fatal, because the current goes through the heart.