Skip to content
Forums
Main Category
Electromagnetism
Can an information ...

Can an information be conveyed by ON and OFF states?

In the topic of this forum What are digital logic circuits? (an easily comprehensible course on digital electronics) I show that it is an enormous misconception of today’s electrical engineering when it says that "zero" represents no current/voltage and "one" represents current/voltage.

To oppose my assertion, he offered the example of a number of lamps going on and off: 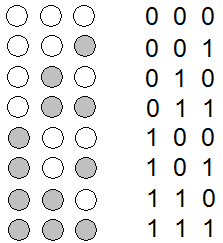 These 8 rows of circles are different states of only three lamps which turn on and off, and each new row in the figure is a new state of the lamps at equal intervals. It is actually a 3-bit counter.

Here we have a case where seemingly an information is conveyed by two states: on and off. But there is a flaw in this way of thinking. Why?

Because both states are signals, that is, when a lamp is off, it is also a signal. We do see that the lamp is off.
To make it clearer, imagine that the lamps go on and off in total darkness. Look at the image below:

Only two lamps of a larger number of them are on. But this time we can’t see how many lamps are off between the two which are on. Because of this, we cannot know which binary number represents this state of the lamps.

What are the two different signals in the digital electronic circuits?

Look please at the figure below:

What do you see? A sine curve. What does it represent? An alternating current flowing one half cycle in one direction, the next half cycle in the opposite direction.
Those Plus and Minus, somebody additionally called "one" and "zero".

What do you see below? A square wave. A so-called clock. This clock is composed of "ones" and "zeros" alternately.

Do you think that there is an essential difference between the second to last and the last picture? No, there is not. "One" and "zero" in the digital electronic circuits are completely identical in intensity, only different in sign.

Here is quotation from Wikipedia, which in this or similar form can be found in millions of textbooks:
"In most digital circuits, the signal can have two possible valid values; this is called a binary signal or logic signal. They are represented by two voltage bands: one near a reference value (typically termed as ground or zero volts), and the other a value near the supply voltage."

This is the hugest misconception of the digital electronics: it speaks of two different voltage bands in intensity. One is high voltage, the other is "Ground" or "zero volts".

Wrong, wrong, and wrong again.
BOTH HAVE THE SAME INTENSITY.

Let me make a comparison. Imagine a three dimensional coordinate system. Every point in that system has some values x,y,z [let's say (2,3,5) or (10,2,8) etc.]. Only the cross point of the axes has a value ZERO (0,0,0).
Let me ask you now this: Is there really a point in the Space/Cosmos which has a value ZERO? Of course there is not. All points in the Space are equal. It is only a human's representation to mark one point as zero.
Similarly, both ends of a battery have the same value in intensity. It is only a mathematical convention to mark one point as a reference point, that is, zero. The mathematical conventions have nothing to do with physics. Don't make this enormous mistake: to take a mathematical convention as an objective physical reality.