Skip to content
Forums
Main Category
Electromagnetism
Why is the Neutral ...

Why is the Neutral wire not dangerous?

I will begin this answer with a brief extract from my answer to what a battery is, because I need it for what follows (for more details please see What is a battery?). A battery can be regarded as a container of a dissolved agent wherein two metal plates (say copper and zinc) are partly immersed. The part of the copper plate outside the liquid is polarized in one sense (plus +), the immersed part in the opposite sense (minus -). For the zinc plate applies the opposite. Plus means blowing, Minus means suctioning (in relation to this, please see Is positive and negative electricity nomenclature arbitrary? and What is an electric wind?). The two metal plates of the battery can be imagined as two fans. The one that is blowing outside the liquid (positive electrode = copper), it is suctioning inside the liquid; the one that is suctioning outside the liquid (negative electrode = zinc), it is blowing inside it. When the electrodes are connected with a metal wire, a closed flux is created. The Plus is the strongest near the Plus-pole and, as we move away from it through the wire, its strength continuously decreases. The same applies to the Minus, but starting from the Minus-pole. Figuratively, we can represent it this way:

Let’s say the DC source is of a pretty high voltage. If we touch with one hand one of its terminals and with the other hand a large electrically conductive object (which is not otherwise connected with the circuit), then we can sense an electric shock. However, if we do the same again, but this time touching the middle of the connecting wire, then nothing will happen, that is, we won’t sense anything. Why?
In the first case we have touched either the Plus or the Minus terminal of the DC source where the intensity of the blowing or of the suctioning is very strong. In the second case we have touched a point on the wire where the blowing and the suctioning have equal intensities. Thus in that point they completely cancel each other out regarding their intensities toward outside the circuit.

In other words, if two equal resistors are connected in series to a high voltage source, then the point between the resistors is not dangerous toward outside the circuit. What does it mean “toward outside the circuit”? It means that if we touch that point with one hand and at the same time a large electrically conductive object (which is not otherwise connected with the circuit) with the other hand, then no electric shock will be sensed. In relation to this, please see these very important questions What is Ground in electricity? and Electricity flows in an open circuit, too! 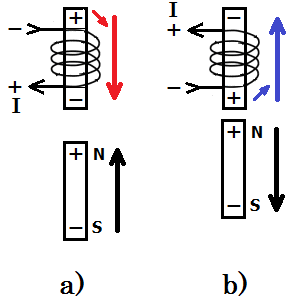 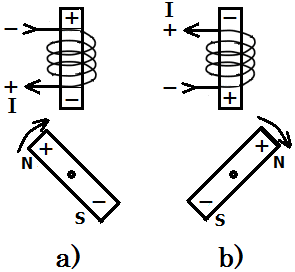 If the magnet is rotating between three coils placed at angles of 120°, we get three independent sources of alternating current, a three-phase generator (diagram below).

The magnet in the diagram is turning counter-clockwise. With the vertical green line in the graph on the right is marked the moment, that is, the position of the magnet in the left diagram. The faster the magnet is turning, the greater will be the frequency as well as the induced voltage/current.

That the magnet is turning counter-clockwise, we can conclude it from the graph most easily in the following way: when the magnet is exactly opposite the blue coil, then its current is zero. The next encounter exactly opposite a coil will occur between the opposite pole of the magnet and one of the other two coils. Since after a zero point of the blue sine curve follows a zero point of the orange curve, it means that the S-pole will move toward the orange coil.

Imagine we have two equal batteries and two equal resistors. They can be connected in four ways presented below:

Let’s say we connect now those two identical batteries and resistors as presented below: 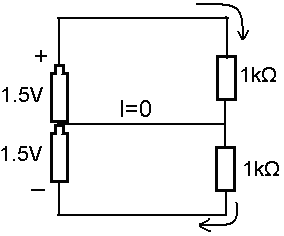 No current is flowing through the middle horizontal branch. Why? Look at the next figure: 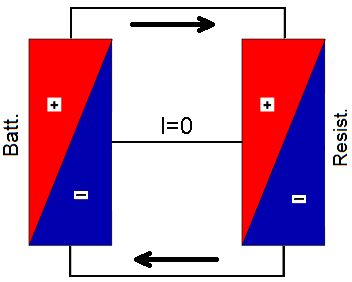 The distribution of the Plus- and the Minus-intensity in the batteries can be figuratively represented just as it was represented in the resistor from the beginning of this answer. Since the horizontal middle wire connects two points where the ratio Plus/Minus is the same, no current can flow through it. Let’s imagine that instead of two 1.5V batteries and two 1K resistors, we have four 0.75V batteries and four 0.5K resistors connected as in the figure below. If we connect, so to say, the 1/4 points on both sides, we will again get no current in the middle horizontal branch.

What has just been said does not apply only between generator’s and load’s side, but also between resistors connected in parallel. Look please at the figure below:

In this figure are represented two wires of different resistance connected to a battery. The lower wire has a lower resistance than the upper wire. Through the cross wire will flow an electric current downward because at the upper connection-point the ratio Plus/Minus is greater than at the lower connection-point. Please pay attention to this: although the Plus is stronger at the lower point, yet the Minus is also stronger there which considerably cancels the strength of the Plus. Note also this: since an electric current is flowing through the cross wire, the distribution of the Plus- and the Minus-strength in the two resistance wires will not look like in the figure anymore. However, the current through the cross wire is very weak when the cross wire connects two points with a small difference in their Plus/Minus ratios. In that case we can consider the presented distribution as approximately valid (in relation to this, see also Wheatstone bridge - Wikipedia).

Back to the three-phase current. Look please at the diagram below:

On the left side is shown a three phase generator with three identical lamps connected to it - one lamp to each phase (so-called balanced load). The coils as well as the lamps are in star-connection. The central points of the stars are connected with a wire. It is the neutral wire.
As a reference direction for the induced currents in the coils we must choose between two possibilities: either all of them will point away from the star-point or all of them will point toward it. (footnote)

(footnote) Why must we choose so? Let me explain it.
When we make a three-phase generator, we want the time dependence of the induced voltages/currents to be as shown in the figure (a) below. But if we don’t pay attention to something, we may get an arrangement of the sine curves as shown in the figure (b). We don’t want that to happen because in that case we won’t have a proper Neutral, the electric motors will not turn and many, many other problems. 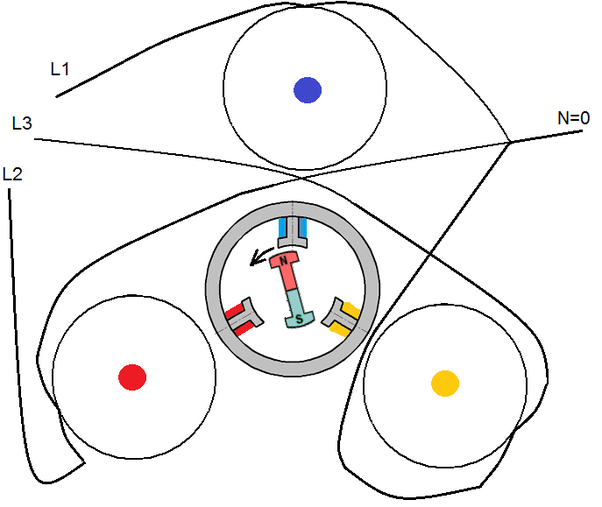 When the North-pole of the magnet is moving toward the red coil, then the left end of the coil will be Plus and the right end will be Minus. The same will happen when the North-pole is moving toward the other coils. Only in this way we will get a proper arrangement of the sine curves and consequently a proper Neutral.
With the arrows pointing either away from the star-point or toward it, we actually make something which is in agreement with the things I have just said. The arrows actually show that when a pole of the magnet is moving toward a coil (or away from a coil), the induced current has always the same direction. (end of footnote)

As you can see, with the arrows painted in the same colors as the sine curves (red, orange and blue) I have chosen the variant the arrows pointing toward the star-point.

Let’s consider now the moment marked with No.2. The current in the red coil has risen to the positive maximum, whereas the current in both other coils is exactly half of the negative maximum. The situation in this moment can figuratively be represented in the following way:

Look please at the figure on the right. With the colored arrows are now shown the factual directions of the currents through the branches. As we can see, the blowing of the red coil toward the star-point is ideally met by two equal suctions of the other coils. The same applies also to the star-point on the resistor’s side, only the directions are reversed.
The sum of the orange and blue current is the red current. In this moment we have the same situation as we have already had above:

This situation takes place actually in every moment of time provided that the load side is balanced. In practice, the load side is always very close to balanced. How so? Because there is a large number of end-users. Let me make a comparison. If we throw a coin ten times, the result could be 7 to 3, or 70% to 30% in favor of heads or in favor of tails. But if we throw the coin thousands of times, the result will be very close to 50% to 50%. The same applies to the electricity. The higher the number of the end-users, the greater is the likelihood that the load on the three phases will be evenly distributed.
If the load is not evenly distributed, then a current will flow through the neutral conductor. It will bring disturbances in the rotation of the generator, that is, it will affect its smooth rotation. The coil where more current is flowing will offer a greater resistance to the rotation of the rotor’s magnet than the coil where less current is flowing.
If the load is evenly distributed and thereby increases, then the resistance to the rotation of the rotor’s magnet also increases. Therefore the wicket gates at a hydropower plant need to be opened wider to allow greater flow of water to maintain the same frequency of turning and thus the same output voltage.

Let me briefly mention yet another thing. Once the neutral conductor comes out of the last transformer, we may call it a trunk. Then it branches off into many buildings and again each branch splits toward many apartments of the end-users (figure below). The same applies to the phases. 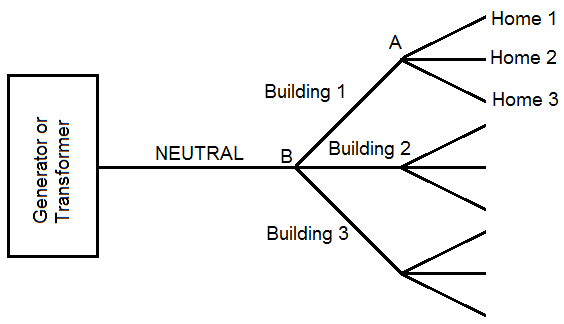 Let’s consider an “ideal” case. Let’s say that the Phase 1 of the Home 1 is more loaded than the other two phases. It is also the case in the Home 2 but there with the Phase 2 and in the Home 3 but there with the Phase 3. Through the neutral wires in all three homes will flow a certain amount of current, but these three currents will close themselves in the point marked with A in the figure above. If they don’t complement ideally, then a certain amount of current will flow between the points A and B. This current may complement with the currents from the other buildings. I have drawn in the figure only three buildings with three homes each, but the number is usually much bigger.

Wherever we touch the neutral wire, it doesn’t make much difference, because it is usually made of copper. The copper is a good conductor, thus the voltage drop along a copper wire is negligible. What is a voltage drop? Consider the following figure: