What is "Ground" (GND) in electricity?

“Ground” (GND) is such an enormously confusing term in the field of electricity, so that if one doesn’t go back to the basics, the confusion can become only worse. 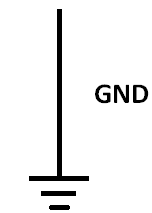 First, I want to say that the word “ground” is absolutely not well-chosen word for what it should represent in the field of electricity. Much more appropriate is the German word “Masse” (which means “mass”). To the word “mass” for better understanding I would add electrically conductive mass. With this I don’t want to say that the confusion in the German literature is lesser, but only that this word is more luckily chosen one.

Here I will compare the electric current through a metal wire with wind (through a pipe).

If a fan without internal drive is standing on the way of the wind, then the fan is turning. We can simulate this by taking a small fan (like those in computers) and a hair dryer. We bring the turned-on hair dryer close to the fan. It starts turning in one direction. If we bring a turned-on vacuum cleaner close to it, then it starts turning in the contrary direction. But if we attach the fan to a wall and then bring the hair dryer or the vacuum cleaner close to it, it doesn't turn. The reason is that behind the fan there is no space filled with air where the flux can spread or from where it can suction.
Exactly the same happens with the electric flux. When we touch with a finger the end of the phase tester (one-contact neon test light) (the other end touches the phase), our body is becoming the "air space", actually the mass with sufficient electrical conductivity whereto the flux can spread or wherefrom it can suction and consequently the lamp lights up. [ The phase tester is a series connection of a resistor and a small neon lamp. ]
If the fan in the above-mentioned example is a little away from the wall, then it is turning slowly. The farther it is away from the wall, the faster it is turning, until it reaches the maximum speed. The further removal has no influence on the turning speed. Let’s compare this to the phase tester (PT). If we attach a small piece of metal wire on the back end of the PT, then the lamp lights up weakly (we hold the PT on its plastic part, hence our body in this case has no influence on the phenomena). The longer or the thicker the wire is (or both at the same time), the stronger the lamp shines, until it reaches the maximum. The further increasing of the wire volume has no influence on the lamp brightness. [We can do the same experiment with an incandescent bulb.]

These are the basics of the concept called “Masse”. From here we see that for the current to flow through a metal wire, no closed circuit is needed. I can cite books on electrical engineering where already on their first page it is said that for the current to flow, a closed electric circuit is needed. That is simply not true (other examples/experiments on this subject you can find here https://newtheories.info ).

The so-called protective conductor (protective earthing – PE) or popularly called “grounding” (the wire with yellow and green color together in Europe) leads to a metal plate buried in moist ground near the transformer or elsewhere. The purpose of this conductor is mainly for electrical devices that have a metal housing (washing machines, cookers, refrigerators etc.) It is possible for a phase wire inside the device to come unhooked or the plastic insulation to be damaged and the wire to touch the metal housing. In that case, the whole housing becomes a phase, that is, a potential danger. To avoid this, the protective conductor is attached to the housing. If the phase somehow comes in touch with the housing, then the protective conductor becomes a large mass for the phase’s potential, a strong current begins to flow to the ground, the fuse in the installation blows out and interrupts the current, thus removing the danger.

In electronic circuits, the minus-rail of the battery is often called Ground (Masse in German). This is also very confusing, because Ground/Masse is not a source of electrical potential, whereas the minus-pole of the battery it is.
In the field of electronics much more appropriate would be the word “Reference point” or “Common”.

The metal chassis of a car is unfortunately also called Ground. The car chassis is connected to the minus-pole of the car-battery and it serves as a returning path for the current to save on wires. Take for example the lamp in the trunk. From the battery’s plus-pole goes a wire to this lamp, then the current flows through the chassis back to the minus-pole of the battery. Thereby the current finds the shortest path through the chassis to that pole, i.e., the path of lowest resistance.

Added 23-Oct-2020: In relation to this article, please read about this revolutionary experiment, where direct current is flowing incessantly in an open circuit:

Electricity flows in an open circuit, too