The Bernoulli's principle can be found in the electric current, too

The greater the velocity of the body is, the stronger is the plus in front of it as well as the minus behind it. This principle can be found in many things, among others also in the so-called “Bernoulli’s principle”.

What is “Bernoulli’s principle” in its basic form? The picture below shows it. The water flows through a wider pipe and then through a narrower pipe. The velocity of the water increases in the narrower pipe. As a result, the water column over it is lower than over the wider pipe.

At the same time a stronger plus appears at the front part of the narrower pipe. Everyone knows that the water-jet which comes out of a pipe reaches farther if we narrow the pipe. That happens because higher pressure occurs in the front part.

The principle of an arrow can also be seen with light. The archetype of this pattern (≈ principle) is the flame of a candle or a cigarette lighter. A violet-blue color appears on the back and a yellow-red color on the front of this fiery arrow. (The violet/blue/cyan are minus-colors, the yellow/orange/red are plus-colors. In the past they have been called cold and warm colors, but now I additionally call them minus and plus-colors. )

(image borrowed from www.pixabay.com, the arrow is added by me)

And this pattern can be found wherever colors appear. Look at, for example, these colors obtained from a light source (it is in the middle) with the help of a diffraction grating (image borrowed from Except Integrated Sustainability. The arrows are added by me.). 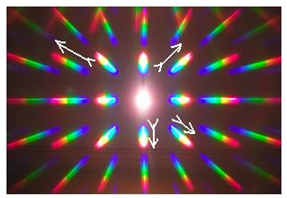 A manifestation of the Bernoulli’s principle can be seen also with another fluid, and that is electricity. If we make a series connection of two wires of same metal, but of different cross-sectional areas, place them on a table in straight south-north direction, under each piece place a compass (the compasses are identical) and then connect this assembly to a battery, we will notice that the deflections of the needles are different. The magnetic needle under the thinner wire makes greater deflection than the needle under the thicker wire (more about this you can find here https://newtheories.info). 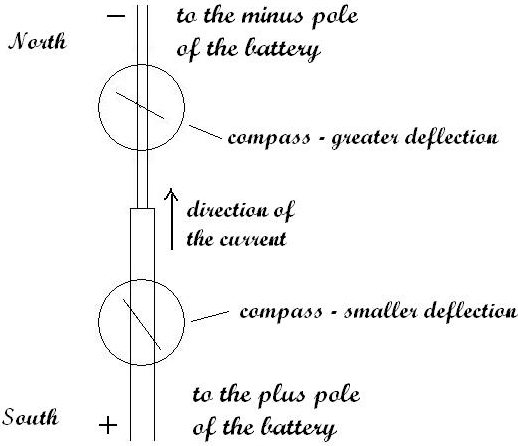