[Sticky] The principle of electromagnetic induction can be found in mechanics and in an optical illusion!

I believe everyone is quite familiar with many optical illusions: 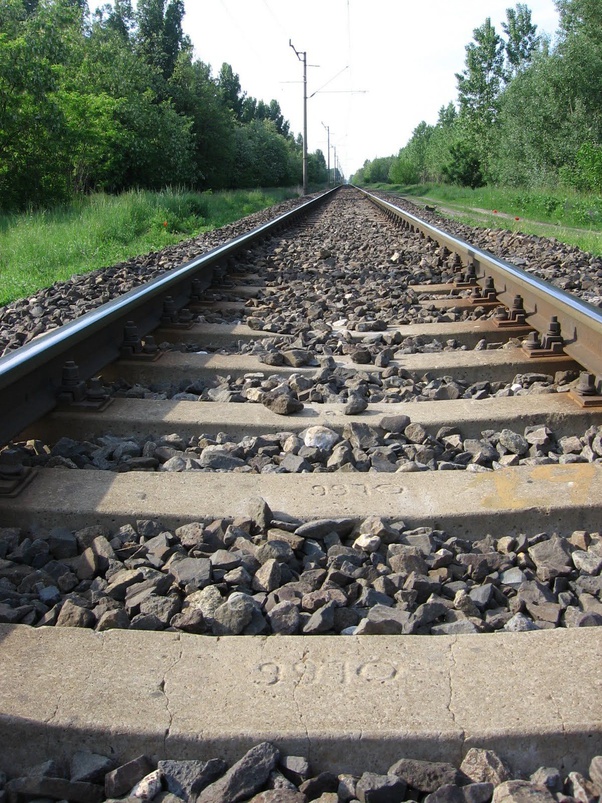 This is one of the most known optical illusions. When we stand on railway tracks, we have the impression that the tracks in the distance get closer and touch each other.

If we stand on a hill and look down at the town under us, we see the nearby houses bigger than the houses in the distance. Is this an illusion?! How would we otherwise have a real sense, what near to us and what farther away is?! Thanks to this "illusion", we can truly perceive the reality.

The "illusion" with the railway tracks has the same basis as the “illusion” with the houses. And many optical illusions also come down to this: we see the distant objects smaller than the nearby ones.

Please look now at this image: 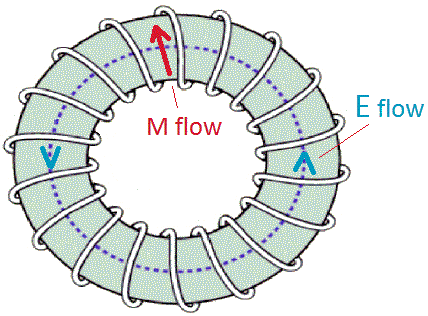 This is an image of a toroidal coil, but I made use of it to represent the magnetic current of a DC-carrying wire loop.
This image can serve two purposes:
1) as an optical “illusion” and,
2) as a real representation of what is going on inside the loop when we move a magnet in and out of it.

What is the optical “illusion” hidden in this coil? If we look at the helical line of the coil, we see these line segments “ \ “ above as well as below. There is no difference in the tilt of these segments above and below. Both are tilted to the left.
Look now at this Pinna-Brelstaff “illusion”: 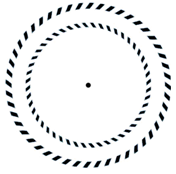 (footnote: You can find more effective circles of the Pinna-Brelstaff illusion on the web.)

The inner circle has the same line segments as the toroidal coil.

Look now at, so to speak, the inner segments of the toroidal coil (figure below).

Unlike the previous ones, these segments have different directions. Those above point to the left, while those below to the right.
These segments can serve to represent the induced, or rather, the incited [from Latin incitare “to set in motion”] magnetic forces, which create a magnetic current in the loop when we move a magnet in and out of it.

When we move the magnet into the loop with its Plus-pole ahead (I call Plus the pole of the compass needle that points North), then the incited magnetic forces in it point with their plus-poles toward us, that is, they resist the movement of the magnet. In the upper part of the loop they point, as it was already said, toward our left side (figure below).

When we move the magnet into the loop with its Minus-pole ahead, then the incited magnetic forces in it point with their minus-poles toward us, that is, they resist the movement of the magnet again. In the upper part of the loop they point toward our left side (figure below).

Thus, the incited electric current in the loop is flowing clockwise.
[ I want to stress that the incited magnetic (and consequently also electric) forces are in the wire, but their effect is present also near the wire. ]

In this way you can easily determine the direction of the induced (incited) current in a wire by a moving magnet. You don’t need such rules as right hand, middle finger, fore finger, thumb etc., etc.

Since the magnetic helix is more compact when the current is stronger, it follows that the loop’s magnetic field is also denser.

Hence, the magnetic field of a loop is twisted and the stronger the current through it is, the greater also its density is.

Please watch now the kid’s toy in this video:

Two essential parts of this toy are the twisted wires and the washer. When we push the twisted wire through the washer or vice versa, the latter is turning. In this way a linear motion is converted in a circular motion.
The same working principle is applied in some ashtrays with spinning lids, other kids’ toys (carousels, tops), push-pull screwdrivers and drills etc. [ In the push-pull screwdrivers and drills, the nut (i.e. the washer) is hold stationary and the metal rod with the twisted groove is turning. ]
And exactly the same principle is present also when we push a magnet into and pull it out of a loop. But since that what is going on during this process is partly immaterial, it is much more diverse than that what is going on with pure material objects.

[ The image of this manual drill is borrowed from Handy Manual Drill. The text in the image is added by me. ]

The turning in this manual drill is happening due to these relief lines in the twisted object [meaning of “relief”: the difference of elevations on a surface]:

Such relief can be achieved either by drilling a twist in a rod, or by twisting two or more wires as the man did in the video.

The same phenomena we encounter also with the magnet and the loop.

But look, we cannot make the washer turn if we only turn the twisted wire. Why? Because in this case there is no linear component of the motion of the relief lines [ I hope it is clear what I mean with it ]. I mention it because of the Faraday’s paradox. Please see: What is the Faraday paradox?

There is one more way to incite a magnetic current and consequently also an electric current in the loop. How? By a sudden twisting or untwisting of the magnetic field. This happens in the cases of an inductor and a transformer [ Please see: What is magnetic hysteresis? ]. The linear component is present during the twisting and untwisting.

I believe that we can make the washer also turn if we find a way to abruptly untwist the twisted wires. 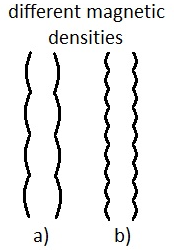 The figure (a) represents a lower, while the figure (b) a higher magnetic density. The relief lines which I have already drawn

are denser when the magnetic field is stronger. Hence, when we are moving the magnet toward the loop, those “relief” lines of the stronger magnetic field are hitting (inciting) the magnetic forces in the wire with higher frequency and thus the incited magnetic current is stronger.
As I have already said, the phenomena of electromagnetism have a greater diversity than those with pure material objects. Here is a case which is impossible with material objects. We can move the magnet toward a metal loop which has a smaller circumference than that of the magnet and a current is incited in the loop. In this case only a part of the magnetic field passes through the loop. To understand this, we have to apply the principle of self-similarity. It is a very important principle and this mankind should devote more time to its investigation [ Self-similarity - Wikipedia ].

Please read now the first passage of the Albert Einstein’s “On the Electrodynamics of Moving Bodies”:

“It is known that the application of Maxwell's electrodynamics, as ordinarily conceived at the present time, to moving bodies, leads to asymmetries which don't seem to be connected with the phenomena. Let us, for example, think of the mutual action between a magnet and a conductor. The observed phenomenon in this case depends only on the relative motion of the conductor and the magnet, while according to the usual conception, a strict distinction must be made between the cases where the one or the other of the bodies is in motion. If, for example, the magnet moves and the conductor is at rest, then an electric field of certain energy-value is produced in the neighborhood of the magnet, which excites a current in those parts of the field where a conductor exists. But if the magnet be at rest and the conductor be set in motion, no electric field is produced in the neighborhood of the magnet, but an electromotive force is produced in the conductor which corresponds to no energy per se; however, this causes – equality of the relative motion in both considered cases is assumed – an electric current of the same magnitude and the same course, as the electric force in the first case.”

What does this guy say in the first sentence? He says that the experiments contradict the Maxwell’s theory. According to that theory, if a magnet is moving in the void space, then besides the magnetic field, there is also an electric field adhered to it. If a metal wire is placed on its way, then this electric field (which is also present without the wire), appears also in the wire. According to this theory, when the wire is moving and the magnet is stationary, no electric current should appear in the wire.

And this guy, without any understanding of electromagnetism, takes these experiments as a basis for his theory of relativity, that is, he asserts that only the relative motion is what counts. But a simple experiment, called Faraday paradox, can disprove his confusing theory which, except for the confusion, hasn’t brought anything to this mankind. The same applies for the other guy’s theory.

I have begun this post with an illusion to tell you that there are not absolute illusions. In every illusion there is reality. The same principle in the illusion from the beginning of this article recurs also in a mechanical and an electromagnetic sense. The latter are surely not illusions.

I am sure there are many questions which are not explained in this post. For more, please see:

What is electromagnetic induction?

Is Faraday's law of induction true?

Are electromagnetic waves transverse or longitudinal?